Qunli National Wetland Park is situated within the highly urbanised and high-density area of Qunli New Town, on the eastern outskirts of Harbin City, North China. The project aimed to counter flooding and waterlogging issues in this new urban district being built around the perimeter of the park. A strategy was adopted to transform the dying natural wetland into an urban stormwater park that provides multiple ecosystems services for the new community. It is an example of the so-called “sponge city” model of nature-based solutions.

The site has been converted to perform a multi-functional role. Stormwater is collected by pipe from the city stormwater networks before being distributed to the many small ponds and ditches that were created using a cut-and-fill technique. The water is then cleaned and stored in the ponds that create a buffer zone around the wetland.

The storage prevents pollution washing directly into the sensitive wetland habit and allows the underground aquifers to re-charge. The native biodiversity is thus protected and the habitat restored. The stormwater is now no longer a threat to the city and the local habitat but an environmental asset to the city that also provides a popular urban facility. The improvements to the local ecosystem has led to area being upgraded to a designated National Urban Wetland Park.

This project performs well for accessibility due to the layout and location, apart

The buffer zone also provides a recreational space for people between the wetland and the city, a space where people can observe interact nature. This runs right around the perimeter of the park.  Numerous viewing platforms and towers are arranged amongst the ponds and mounds where people can observe the distant views of the wetland. Walkways amongst the tree canopy with sheltered seating areas, allow visitors a close view of the wildlife amongst the trees with glimpses of the wetland. Native vegetation is also used, such as indigenous grasses and the native silver birches, thus enhancing the ecological value of the area. The site is also overlooked by numerous hi-rise housing blocks, giving views of nature in this densely urbanised area. 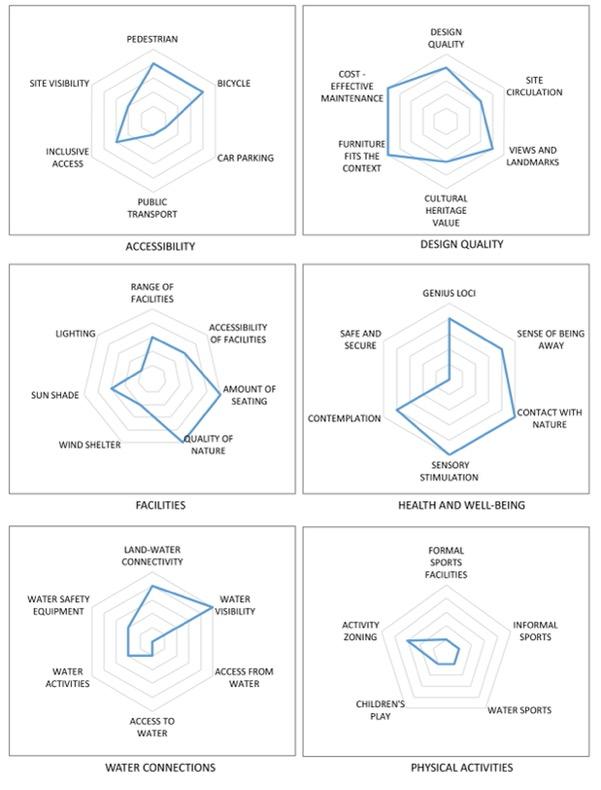 The site is well connected to the surrounding development through pedestrian pathways, although steps do provide obstacles for wheelchair users. Limited parking is also provided for private cars and buses. The site has public transport connected within walking distance. The vegetation around the site screens the interior from view which is then revealed from the upper levels of the walkways. The design uses a range of materials and is well-constructed. The main aspect of maintenance is related to the paths and encroaching vegetation. As it is a new park in a recently urbanised area there is no specific link to cultural heritage.

The quality of nature is high in this project due to its role as a protection barrier to a natural wetland and its incorporation of natural vegetation. The stands of birch trees with the raised pathways also brings people close to nature from a different perspective, giving them a bird’s eye view of the surroundings. These raised sections also provide a view of the protected area, thus increasing the visibility of the water in addition to those paths that meander around the constructed ponds. The health and well-being aspects are associated with some degree of a sense of being away once within the site perimeter, good contact with nature and sensory stimulation.

As it is a constructed wetland that provides an area for stormwater run-off from the nearby city around a core of protected wetland, there is no access to water, nor are any waterbodies suitable for sporting activities. Recreational activities are limited to walking, running and cycling along the pathways.